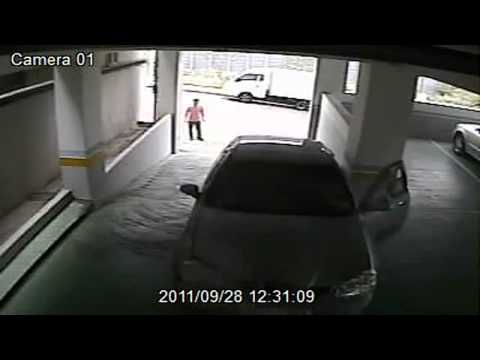 Parking garages in big cities are often difficult to enter, but this is inexcusable. After receiving her entrance ticket for the parking garage, the driver accidentally accelerated and smashed into the side wall. That’s OK, we all make mistakes.

But for some horrible reason, she continued to accelerate, painfully scraping and destroying her driver side body work until she smashed straight into a concrete wall! The car slowly rolled back, and the woman exited the car, shaken, but hopefully uninjured.

But again for some horrible reason, after reaching back into the car for something and leaving the car door open, the car started to roll back down the incline after seemingly being knocked out of park. Again, the car painfully scraped down the side wall to an ultimate stop, but not without tearing the door off backwards.