Advertisement
Video > The Human Jukebox On The Streets Of New York

The Human Jukebox On The Streets Of New York 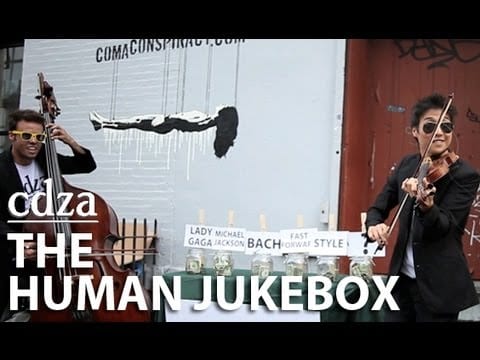 CDZA , the online musical group known for their out of this world musical adaptations, took to the streets of Brooklyn for their latest project.

With a cello, violin, and a few surprises, they had people in the streets ‘operate’ the band by dropping change in the available jars that ranged from ‘fast forward’ to ‘Michael Jackson.’

They dubbed the concept The Human Jukebox, and the video is already featured on YouTubeTrends, NOWmsn, DailyOfTheDay, LaughingSquid, and CBSNews.

Can it get anymore hipster than this? Good thing most of the people watching on the street weren’t actually watching the show, but rather live Tweeting it like any good hipster should.