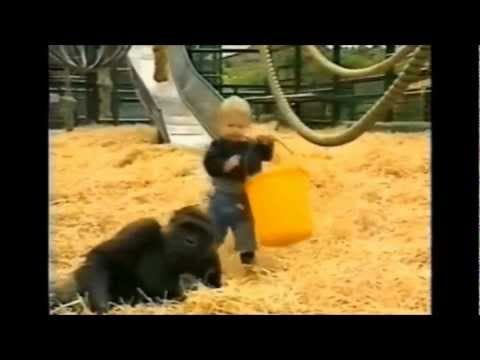 Twenty years ago, 18-month-old Tansy had the special opportunity to play with 300 pound gorillas as her father was part of the The Aspinall Foundation, an organization that works to protect gorillas in countries like Congo and Gabon.

Her father has decided to release the vintage home video now, even though he may face criticism for apparently being a lax parent.

But 23 year old Tansy stands by her father. “I obviously understand that people might find it quite shocking seeing a baby going in with the gorillas because that’s how they have been brought up – to see gorillas in that King Kong kind of way. But really gorillas are such wonderful, gentle animals and they’re so human-like. So I hope it’s a way of people understanding how gentle and kind gorillas really are.”

The video is showcased on DailyMail, Examiner, DailyPicks, and HuffPost.