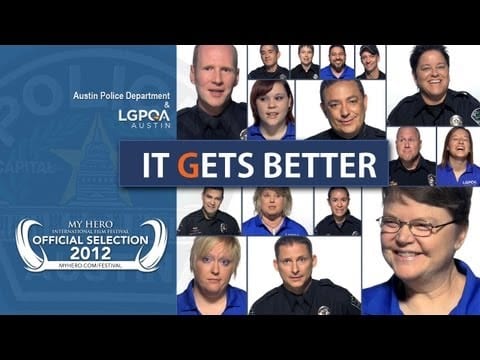 Two years ago, the It Gets Better campaign was kicked off by Dan Savage, and was followed by companies, leaders, celebrities, and even President Obama. The fad has slowly died off, as most do, but has recently surfaced again with a video coming from the last place you’d expect.

The Lesbian & Gay Peace Officers Association teamed up with LGBT officers and civilian members of the Austin Police Department to send a message to youth. It does get better.

The San Francisco PD made a similar video, but that’s to be expected. It’s San Fran after all. But Texas? Obviously, the movement is making some serious headway.

Of all the It Gets Better videos, this may be one of the most emotional and powerful.