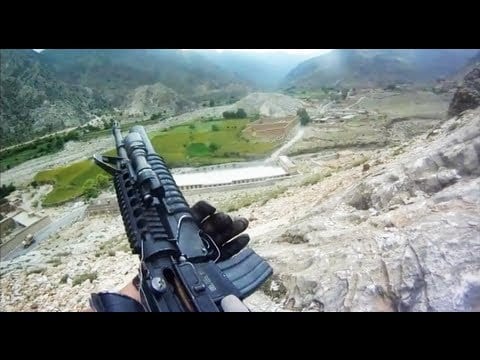 You may have forgotten, but, yes, America is still fighting the Taliban in Afghanistan. We’ve been there for so long, technologies that was once too expensive to equip soldiers with, such as helmet cameras, are now commonplace. More and more videos from combat are surfacing as a result.

This video was just published by Raw Combat Footage Documentation, a channel hyper focused on combat videos, and the video has already garnered over half a million views in just a day.

A US soldier wearing a helmet camera was in a machine gun fire fight with the Taliban in Kunar province. When he decided to descend the mountain, he took heavy fire and was hit a total of four times. Luckily, no rounds penetrated his body armor, and he only suffered minor injuries.

Some have blamed the soldier for getting shot, claiming he made the wrong decision to descend alone. Remember how easy that is to type while sitting in your comfy computer chair.

The dramatic video is showcased on NYDailyNews, Time, Mediaite, TheDailyWhat, and Mashable.