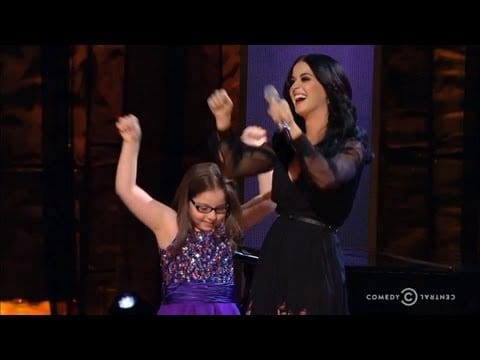 Comedy Central will be airing a Night of Too Many Stars: America Comes Together for Autism Programs special on Sunday, October 21 at 8/7c, and has published a teaser clip that has instantly gone viral.

is a huge fan of Katy Perry like any teenage girl. But unlike most girls, Jodi has autism. But she and her parents were determined to persevere and defeat any obstacle the disability put in her way.

With the help of a special education and therapy program, Jodi has become unstoppable.

How far has she come? Last Sunday she performed her favorite Katy Perry song with Katy in front of millions of people at the Night Of Too Many Stars.

Baby, you are a firework.

Katy was so touched by per duo performance that after the event she tweeted, “I will never forget last night. It was the most important moment thus far of what I do.”

Tonight, she kicked started the social sharing of the video by tweeting that “Jodi is my firework.”

The video is also further featured on EW, Examiner, SeattleTimes, and USMagazine.