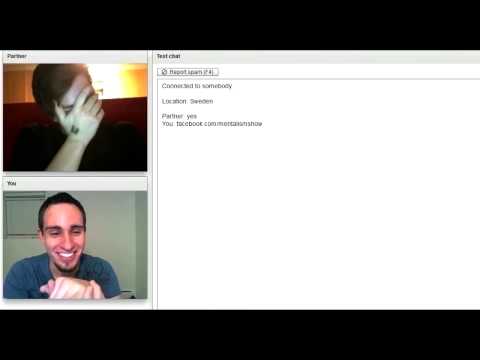 Viewers are amazed and confused at how he seems to be able to correctly write the names of people he just met on Chat roulette on a business card. He shows his new CR friends the name he wrote down, and each time, they all freak out.

The trick is well done, yet obviously fake. He simply took older Chat Roulette video and cut it up to make sense with his own previously recorded lines.

Notice how he says at the start of the video, “Don’t even say anything out loud, I’m gonna show you this first.”

Also, he never has an actual one-on-one conversation. They never say their name, nor do they ever affirm that he had written down the correct name.

To make the conversing seem more natural, he has to quickly cut between a number of subjects at a fast pace. Even the quality of his video isn’t consistent with his correspondents’ videos.

So yes, the video fake, but that doesn’t mean it’s not entertaining.