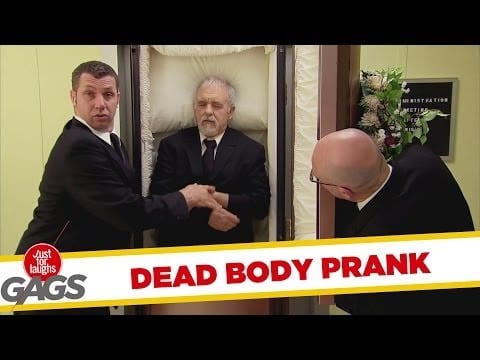 Remember the Brazilian candid camera show that went viralviral with their Terrifying Little Girl Ghost In Elevator Prank? That video currently stands with over 19.5 million views.

Viewers loved the scare prank so much that the show has revisited the same prank concept. Only this time, the unsuspecting prank victim is left alone going up in an elevator with a coffin.

After coffin handlers leave the elevator at the last moment, the rider is already irked. But when the elevator freezes, and the faux-corpse falls out of the coffin, true terror strikes the hearts of the prank victims.

It’s a funny concept, but did they steal the idea from our friends Just For Laughs?

Now, the new prank video is going viralviral, already garnering over 4.7 million views, and being featured on Gizmodo, Neatorama, MostWatched, HuffPost, and ABCNews.