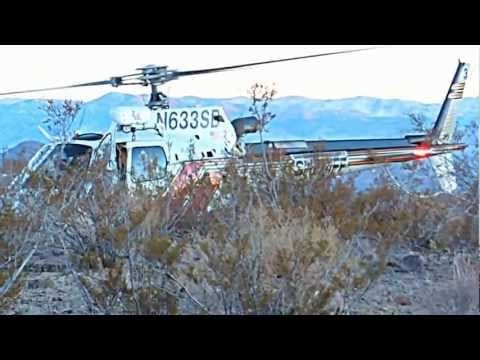 Stonedagin1‘s friend was simply searching for rocks and other collectibles in the desert by the side of the road when a police helicopter started circling her overhead.

After it was obvious the police were interested her and her friend Bobby for some reason, she turned on their camera which recorded this video, titled I DO NOT CONSENT! Jan 24 2013.

The police literally land their helicopter in front of the woman in a dramatic landing. Finally, an officer emerges, and upon contact, immediately starts to question the woman.

“What are you doing here? Do you have ID?”

“Is there a reason you’re stopping us?” She answers the officer. He could only say, “We’re investigating something.” He then questions and searches the woman even though she announces that she does not consent to a search.

The video, which has already garnered over 125,000 views over the weekend, has most viewers frightened by the implications of the sheriff’s actions.

But Andy Moore sees the wasteful interaction as something much more serious. “Harassing law abiding citizens gives cops reasons not to be where the real crime is.” he says.