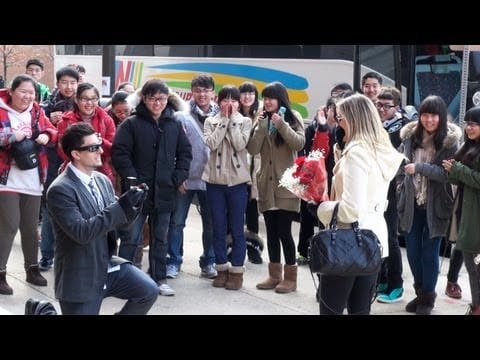 For their new Valetine’s Day-themed prank video, crazy YouTube couple Prank VS Prank broke away from their usual programming of pranking each other to instead prank the unsuspecting public.

Everyone loves a spontaneous marriage proposal, especially on the most romantic day of the year. On the other hand, there are few scenes more awkward and soul crushing than seeing a proposal rejection in the flesh.

So the pranking couple did just that. In packed public spaces, Jesse would give his girlfriend Jeana a bouquet of flowers and then propose, all under the watchful eye of the love-giddy witnesses.

Just when it seemed like they were going to live happily ever after, Jeana would run away crying, ruining the Valentine’s Day romance for those who witnessed the brutal rejection.