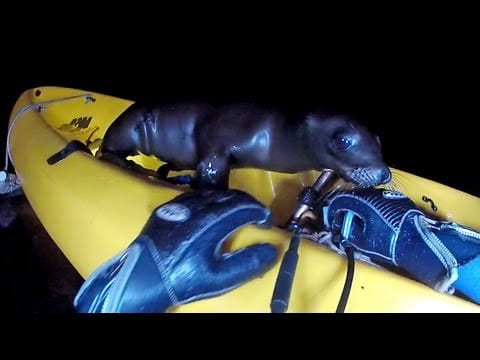 Professional diver Rick Coleman was night diving when he found an adorable surprise waiting for him on his kayak when he emerged from the waters.

At first, the cute sea lion pup scared him enough to literally scream out loud. “Oh my God you scared me!”

After a few moments, he realized the baby sea lion wouldn’t leave, so he climbed in and called his friend. She couldn’t believe it.

In the end, he paddled all the way back to shore where animal rescued helped the little guy warm up. In 45 minutes, the pup was already back in the water.

He caught the whole scene on his GoPro camera, and now the footage is going viral. The video is featured on Today, TastefullyO, ClipNation, and DiveBuddy.