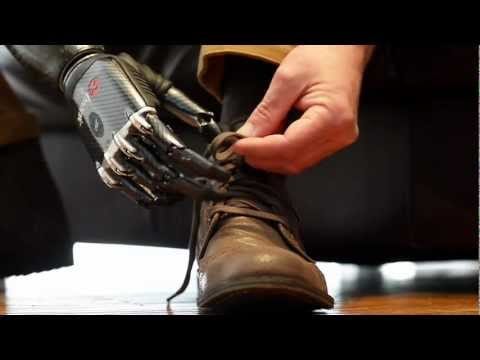 Back in November, SWNS News reported on Nigel Ackland, a man who lost his arm and received a cutting edge robotic prosthetic arm. Nearly immediately, he was being dubbed as the Terminator or Robocop.

Now that it’s been a couple months later, Nigel shows the returning camera crew how he is getting along, including how he can now tie his shoes and deal cards. More importantly, he can grab a beer, and take a nice drink with his new hand.

He also shows how he can look on the bright side of things, such as being able to grab a thorny bush without feeling it.

But he truly puts things in perspective by rhetorically asking viewers, “next time you get dressed, put your trousers on one handed. See how many funny moves you have to make just to get your trousers on.”

The week old video stands with over half a million hits, and is further featured on CambridgeNews, DailyMail, and .