Prankster Jumps Over Cop, Gets Arrested 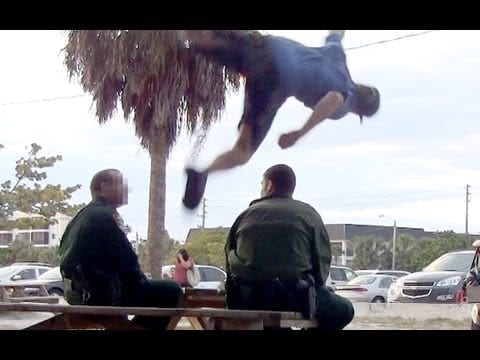 YouTube prankster Ross Creations has made a name for himself online for taking his pranks one step further than the rest. Especially when it includes the police.

His latest video has gone viral since debuting over the weekend, and now stands with over 800,000 views. He secretly pointed a recording camera on two police men sitting on a park bench, and then jumped over one of the officers. Not a smart move.

As they should, the cops yelled at the kid for performing such a stupid stunt. But after seeing the scene was caught on camera, only then did cops arrest him which has ignited a debate online whether the police’s actions were in the right.

And as usual, some viewers think the entire video is staged.

The video has spread across the web, and is covered further on TheDailyWhat, CoedMagazine, Fark, and Inquisitr.