Advertisement
Video > Headless Man At The Drive Thru Prank

Headless Man At The Drive Thru Prank 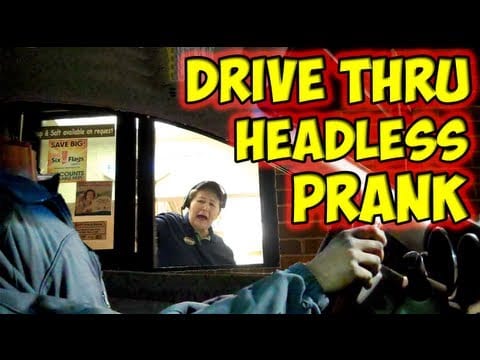 Magician Rahat blew the web away with his viralviral, and utterly hilarious, drive-thru prank when he concealed himself as the car seat, fooling fast food workers into thinking a ghost of sorts was driving the car.

Someone must have ordered from the microphone and driven the car up to the service window, but it appeared empty. Now, that creative prank video from January stands with over 32 million views.

Like Hollywood, Rahat knows too well not to let a good thing just die out, so he has returned to prank the drive-thru, but with an even better twist this time.

He constructed a fantastically realistic ‘headless shirt’ to appear as a tall man wearing a jacket with no head. Naturally, the girls freak out, even more than in the last prank.

Could anything be more terrifying than working the drive-thru window late at night, and a man hands you a twenty with no head on his shoulders?