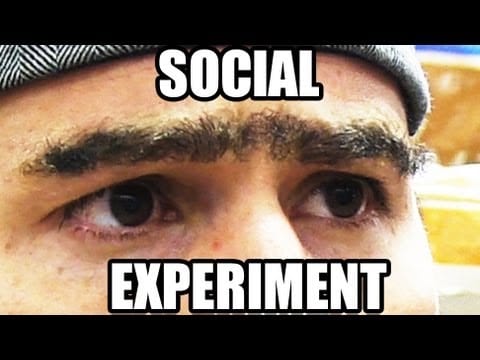 As a kid, Mark Rober–who is viral video famous for his road kill experiment–grew a seriously rocking unibrow. But through high school he discovered the magic of tweezers, and by the 12th grade, he had blended in with the general population.

For years now, Mark has suspected that people with unibrows are discriminated against. As a man of science, he was determined to test out his hypothesis in a controlled manner.

He teamed up with his make-up artist friend who gave him a perfect looking, fake unibrow. Then he approached people at Walmart with simple, open-ended questions. As a control, he did the same with normal eyebrows.

After his inevitably short conversations, the test subjects would almost always comment about Mark’s unibrow.

After breaking down the numbers, Mark discovered the average response he received while ‘normal’ was over 30 words. While he was wearing his fake uni, it was only 16.

Scientifically, it is a possible to claim unibrow discrimination is real. Someone call the ACLU!

Also, teenage girls are way too liberal with their smart phone cameras.