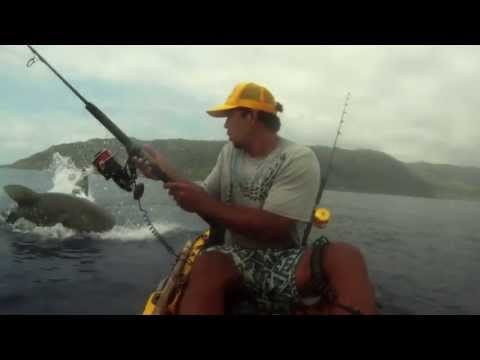 Surprises while fishing are almost guaranteed to go viral if caught on camera. Last summer, Sarah Brame went viralviral after a shark stole the catch she was reeling in–all caught on video. Now, her video stands with over 11 million views.

Isaac Brumaghim maybe the next fisherman to go viral. He was on a routine kayak fishing trip off the coast of Oahu, Hawaii when a tiger shark broke the water trying to steal his catch.

After the initial excitement calmed, Isaac couldn’t help but scream expletives as a way to cope with the quick surge of adrenaline and energy. It’s not everyday you find yourself just feet away from a such a powerful beast and live to tell, or post online, about it.

Now, his new video, appropriately titled Chompy The Shark, has gone viral, amassing over 400,000 views in just one day. It has also been featured by Mirror, NowMSN, Devour, and Fox.