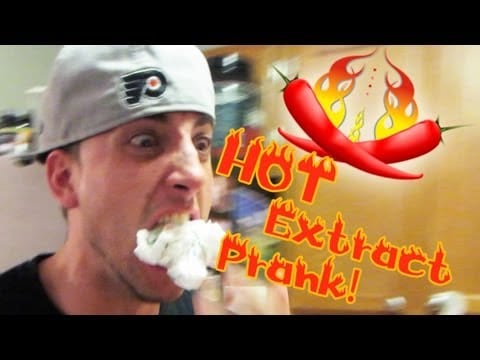 True viral video fans will remember six months ago when Jesse Welle of PrankvsPrank got his girlfriend good by adding a hot pepper sauce extract to her sushi. He used some of the hottest possible sauce on the market, and his girlfriend Jeana was absolutely miserable for hours. Now, that older video stands with over 9.7 million views.

Well, after patiently waiting a long half a year, Jeana was ready to get Jesse back in a similar manner. She made him a nice Mexican dinner, with a mouthwatering burrito for the main course.

The kick? She added much more hot sauce extract than recommended to Jesse’e burrito.

After taking just a few bites, he knew he had been punked. Ironically, he cries how mean it was of Jeana to prank him in this way when he was the one who originally spiked her food with hot sauce.