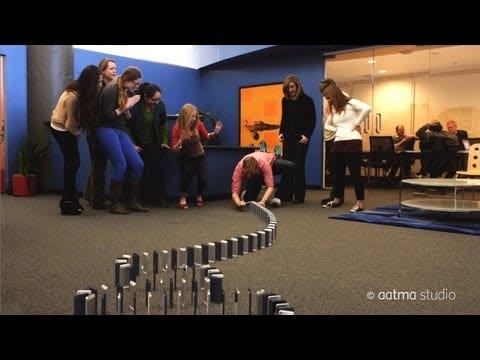 The iPhone has obviously lost a little of its original luster. The once seemingly magical device is now as ubiquitous as the Honda Accord.

With so many extra iPhones lying around, Aatma Studio had to think of something to do with them. In the end, they decided to make a domino set using 10,000 iPhones. That’s one expensive domino set.

Not only that, but this is arguably the only domino set that included a moving elevator in the fall process. Sadly, by the end of the fall, it because evident that CGI was involved, and the video is actually a very good attempt at a commercial.

Now, the new video has already garnered over a quarter million views, and is further featured on TechCrunch, DoobyBrain, and UberGizmo.