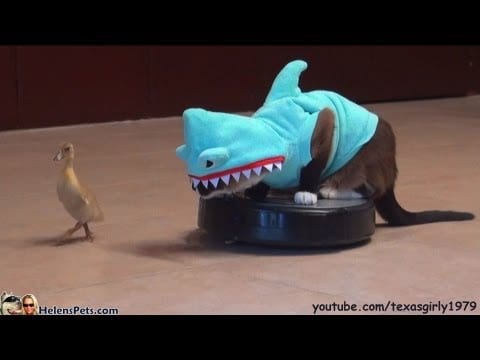 Texas Girly 1979 published this adorable Halloween-pet video a day after the spooky holiday, but it has just experienced a second surge of viewership online now, appearing on LaughingSquid, DListed, HuffPost, and BuzzFeed.

The web has seen plenty of cats riding on Roombas before, but nothing like this. A cat, dressed as a Halloween shark, rides the robotic floor cleaner as a giddy baby duckling runs along. Finally, a witch dog appears just as the Roomba runs out of juice.

As CthulhuSteev says, “The disappointment as the Roomba shuts off is palpable.”