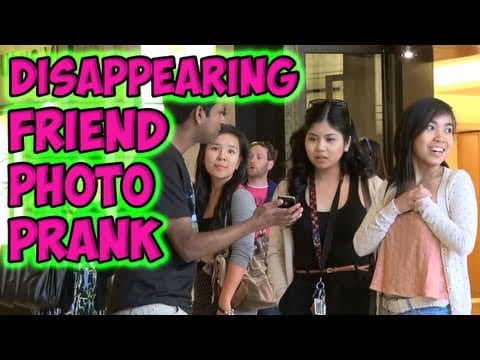 Magician Rahat is famous online for melding his outrageous magic illusions with his pranks.

Back in March he teamed up with fellow YouTube prankster Jack Vale to pull off their imaginary friend photo prank.

On a busy street Rahat would ask passersby to photograph him with his arm around nobody. After taking the picture, the volunteers would be freaked out to discover Rahat’s friend under his arm. Of course they took the trick picture together before the prank.

Now, the duo have teamed up again, this time performing their previous prank in the reverse concept. While standing next to Jack, Rahat would ask people in the mall to take a picture. The volunteers would simply assume Jack was with him and take the picture of them standing together.

But afterwards, Rahat would claim he blinked and asked to see the photo. Only then would Jack quietly run off as the volunteers would be left scratching their heads as they look at the photo they themselves just took of two men that now only contains one.

“But where’s the other guy?” they would ask. “Where’s your friend?”