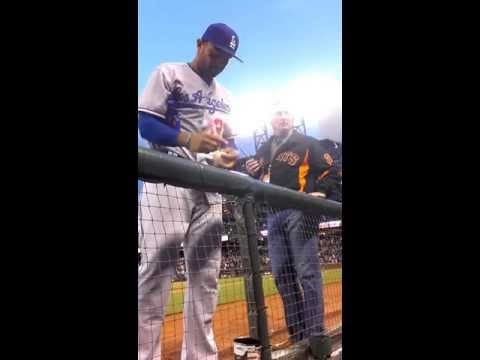 Dodgers player Matt Kemp has gone viral, and it’s all because an unplanned act of kindness was caught on camera.

Joshua Jones is sick with cancer was at the last Dodgers-Giants game with his dad last Sunday. His dad started talking to third base coach Tim Wallach, telling him about his son who is sick but loves the Dodgers and Matt Kemp.

That was all Tim and Matt needed to hear. At the end of the game, Tim gave Josh a ball, and Matt gave him his cap, jersey, and even his sneakers!

Now, video of the scene taken by Josh’s good friend Tommy Schultz has gone viral, amassing over half a million views in just two days.

“He’s fighting a tough battle and this was such a great gift by Matt Kemp! I’ll never forget this,” says Tommy.

The story is further featured on LATimes, YahooSports, and DeadSpin.