Advertisement
Video > These Two Distant Cousins Have Such An Amazing Bond

These Two Distant Cousins Have Such An Amazing Bond 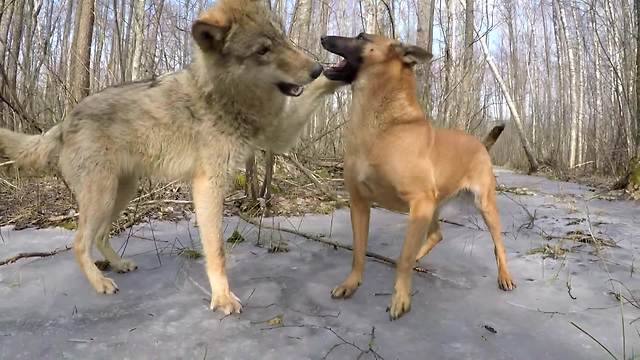 Check out in this video two distant cousins with such an amazing bond. The dogs we all know and love to keep as our loyal pets are the distant cousin of wolves. They come from the same genus “canis”, with dogs belonging to the subspecies “familiaris”. Even to the untrained eye, a wolf looks far different than your run-of-the mill hounds. Even the Husky looks nothing like a timber wolf! Still, when two of these cousins meet, the outcome can be varied – they will either slaughter each other, or form an incredible bond, like these two did!

The upper hand that these two canids have is that the timber, or gray wolf, has been adopted by a human since a very young age. The orphaned puppy grew up with the humans and their canis lupus familiaris pets, so for her, these individuals are her family, her pack! Naturally, seeing her Malinois sister is like seeing a member of any old wolf pack, except she sort of looks different. But they both could not care less what they look like; they have been brought up as equals and it is evident in this video!

The dog seems to have the upper hand in this brawl, but the wolf looks like she’s allowing it. After all, the Malinois is far older than she is and should be allowed to win more often, out of sheer respect. Both dogs slip and slide on the thin ice, but they do not give up on the endeavor to play a bit more.

Not all wolves are friendly towards dogs, though. When a pack of wolves spotted a roaming dog in the outbacks of Italy, their intention was not friendly at all. Still, the brave dog refused to fall their victim.