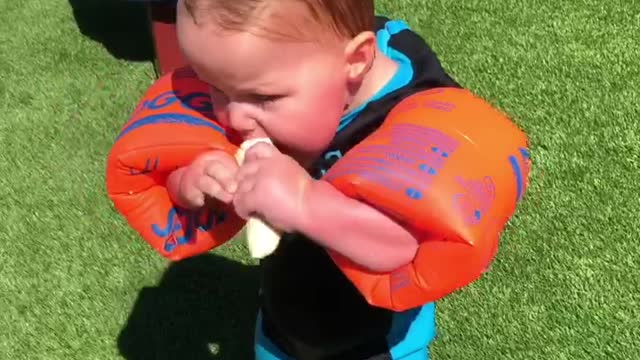 This is just a precious video that depicts an example of the adorable kind of actions that little children do on a daily basis that bring pure joy to the child’s parents, not to mention everyone else around them! This child is videoed while trying to eat a banana. Normally, this might not be a scene that anyone would think to record. However, there is just one extra detail happening in this situation that made it so special and absolutely hilarious. That detail is the fact that this child is wearing arm floaties. These silly floaties are making it so very difficult for this child to enjoy his snack! This is hilarious!

Floaties come in many forms for children. Arm floaties are the most common, and that is what the child in the video is wearing. These floats slip onto a child’s arms. The opening in the center of the float is triangular shaped, which allows it to close around the child’s arms. This is what keeps them securely fastened on the arms, and it is what keeps the child afloat in water. Floaties are imperative for all children to wear who cannot swim.

The parents of the child in the video have responsibly equipped their child with the proper safety measures as seen in the video. There is just one problem, though: these floaties make it especially hard for the child to get his hands close enough to his face.

The poor little boy tries over and over to bite into his much wanted banana, but he just cannot seem to do it. He yelps in disgust each time he is not able to enjoy his snack.
The poor little dear is trying so hard to fix this problem. He just cannot figure it out. He is so young and so small that the floaties seem to take up almost his entire arms! Usually, the floaties go between the shoulder and the elbow. This allows the child to still have pretty full range of motion. It is almost impossible to find ones that will fit a child this small. This is why many parents end up resorting to things like “puddle jumpers.”

Puddle jumpers are flotation devices that the child wears like a full one-piece swimsuit. This suit has flotation sections built into the fabric of the suit to keep the child afloat in water that is too deep for the child to remain safe without some kind of assistance. However, most parents do not consider this one very important problem with suits like this: puddle jumpers make it more difficult for the child to learn how to swim. This is because the suit option feels like a “hug” and is tightly secure around the child. That is a good thing obviously, but when you take these suits off and put a child in the water without them for the first time, the child is going to feel extremely vulnerable and unsafe and nervous.

The parents of this child have obviously found a way to keep their child safe, and they are doing it in a very responsible and respectable way. Thankfully, the little boy does eventually get some help with his issue. The parent who is behind the camera filming the entire scene steps in to help the little boy with his banana. More