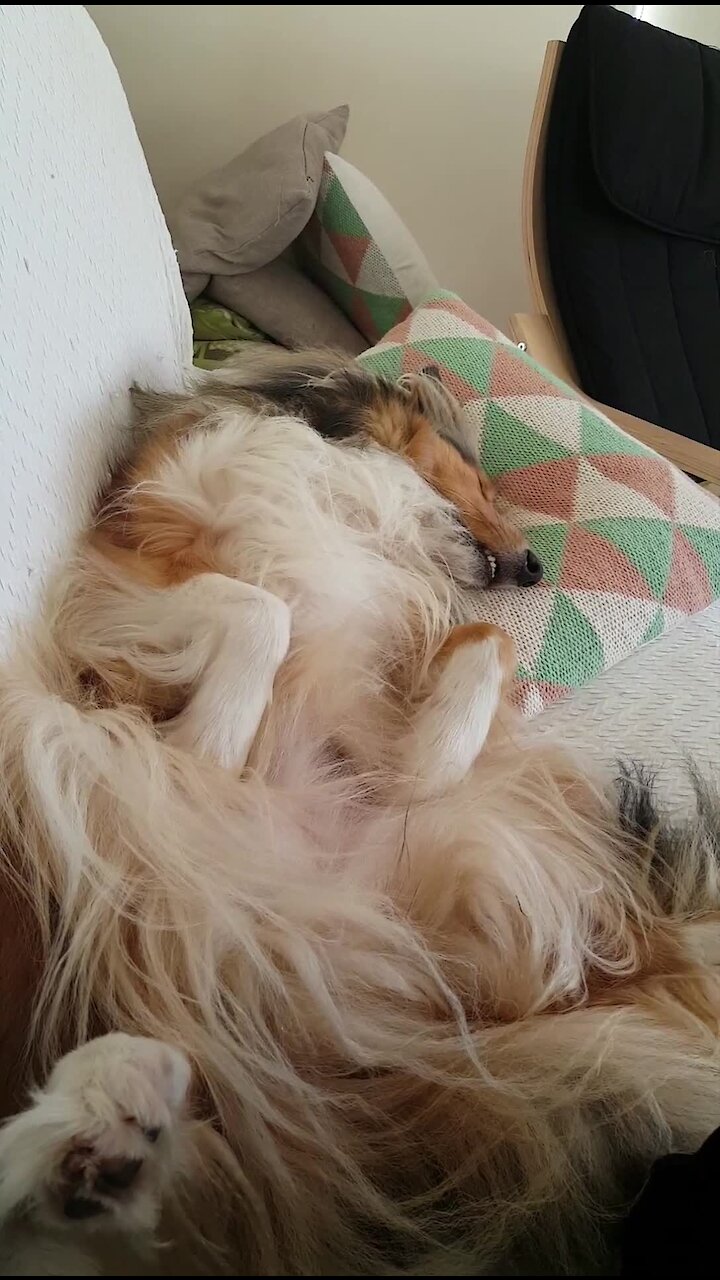 Did you know dogs dream too? They just like humans have the ability to dream while they sleep, it is very likely that they remember what they did the day before and the most important thing about their day is reflected in their dreams. When a dog rings many times we can notice it by the sounds or movements they make while they sleep, just like this dog that looks so funny singing asleep, maybe dreams that it’s a wolf or that it’s on stage singing opera. Hilarious!

This collie doesn’t stop her eloquence or sleeping, she even shows up when she’s supposed to be sleeping peacefully. The owner of this nice dog realized that his pet began to make strange noises, he thought that his collie had already awakened, but his surprise was great when he saw his puppy still lying on the couch sleeping but this was singing even while asleep, his owner seemed very adorable what he saw so he wanted to record the particular scene, which brings out a laugh to anyone. This is one of those moments that happen rarely and make us very special, even more if we love our pet madly and everything he does we want to see, before the eyes of his dream this dog is the best singer of all time. Very funny!

What do dogs dream? According to scientific research there is evidence that dogs dream of activities that are common to them. Since no dog has ever told anyone about the dream they have had, we can only guess. Dogs are likely to dream similarly to humans, repeating the everyday activities that make up their existence, such as chasing, playing, and eating. For example, perhaps when the dog barks or grunts, it probably means that he is reliving a memory of a situation that led him to bark or grunt in real life.

And the nightmares…? If my dog barks in his sleep, does that mean he’s having a bad dream? You can’t be sure that because a dog barks it’s going through a bad dream. Maybe he could just be excited chasing a rabbit or playing with a new toy.

Like humans, dogs enter a deep sleep stage in which their breathing becomes more irregular and they have rapid eye movements (REM). It is during REM sleep that real dreaming and often involuntary movements take place. Dogs can move their paws as if they were playing and breathe quickly or hold their breath for short periods.

Not all dogs dream equally. According to scientists, small dogs dream more than larger dogs. A Toy poodle can dream once every ten minutes, while a Golden Retriever can only dream once every 90 minutes. Sleep also seems to occur more frequently in puppies. This may be because at that age they are processing the acquisition of large amounts of new experiences. More