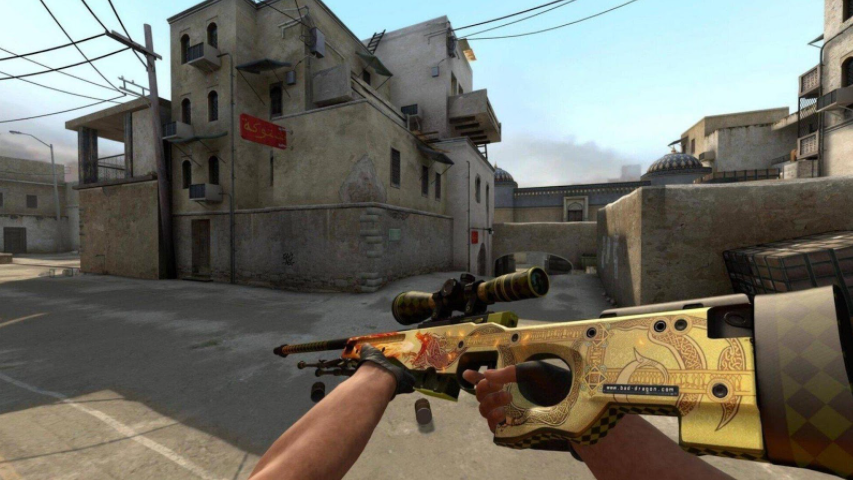 The AWP is the most powerful firearm in CS:GO. It allows you to destroy an enemy with one shot, regardless of their armor. If you are looking for a high-end upgrade for your rifle, Dragon Lore is ideal. Here are the key facts to know about this coveted skin in 2022.

This is one of the oldest designs for the AWP. It was part of the 2014 Cobblestone Collection, which appeared before the launch of Operation Breakout.

Although AWP Dragon Lore is still popular, you rarely see it in the game due to its high price. It is one of the most expensive skins in the CS:GO universe! Although prices vary a lot, you are bound to spend several thousand dollars.

Description of the Pattern

The central aesthetic element is an image of a dragon spitting fire. It adorns the body of the rifle, which is painted pale yellow. The beast is covered with Celtic knotwork ornaments.

The scope, the front section of the barrel, and the rear part of the buttstock are covered with a black-and-green checkered pattern. The remaining parts of the rifle are solid black or green. The pattern index does not affect the appearance.

This skin is not cheap, but players can find a good bargain. For example, you could get a Field-Tested Dragon Lore skin on DMarket for around $3,900. At this stage, abrasions are only visible on the buttstock and forend. The cheapest offer on the platform and globally is a Battle-Scarred skin at around $2,600.

CS:GO rookies may think that buying skins on Steam is a no-brainer. However, the official Valve community, despite its size and security, is not ideal. It is a closed environment where withdrawals are impossible and prices are not always competitive. Players seeking to monetize in-game assets often turn to third-party sites.

DMarket is one of the biggest marketplaces for CS:GO and other games. It offers over 1 million skins and uses secure blockchain technology.  Over 20 payment methods are accepted, including PayPal and crypto. Ten million+ deals have been closed on this platform so far. Traders can even trade their Steam items directly, without transferring them to the market.