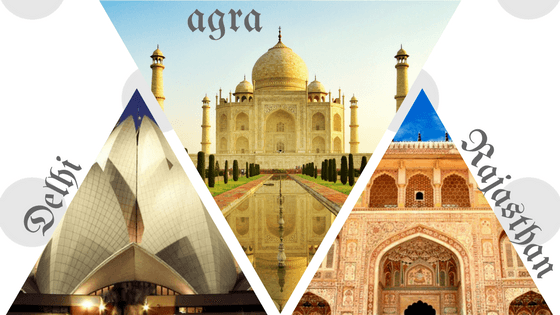 Discover the “Golden Triangle”, with the fascinating cities of Delhi, Agra and Jaipur and come and admire the impressive palaces of the Maharajas and the sumptuous buildings of the Mughal kingdom. The Golden Triangle is the most famous itinerary in India. Rajasthan Tours and Drivers can organize this tour in 4 days or more.

In the morning head to Agra. En route, you will see the Mausoleum of Emperor Akbar which is undoubtedly the largest in the Mughal Empire. This mausoleum is a sumptuous example of the marriage of Hindu and Islamic architecture. The city of Agra recalls the splendour of yesteryear. During the guided tour, you will visit the stronghold of the Mughal Empire, the Red Fort, classified as a world heritage site, which is considered to be the most significant and largest fort in India. Admire the white marble courtrooms, pavilions and the octagonal Jasmine Tower. From there, Shah Jahan, imprisoned by his own son, stared at the Taj Mahal, the mausoleum built for his late wife. Rickshaw ride to the Taj Mahal, an architectural world wonder (closed on Fridays). The grandiose sumptuousness and beauty of this monument and its story of an immortal love will bewitch you.

Today’s stop will take you first to Fatehpur Sikir, where the Mughal Emperor Akbar built his new residence in 1571 in honour of the Sufi Saint Salim Christi. You will also visit the Victory Gate “Buland Darwaza”, the tomb of sage Salim Christi and Hiran Minar, a tower bristling with stone elephant tusks and erected in memory of Akbar’s fetish pachyderm. Arrival in Jaipur in the afternoon, the city of Maharajas and capital of Rajasthan. The walls and gates of the compound painted pink have given Jaipur its nickname of “pink city”. The streets are full of life and the stalls in the markets are packed with jewellery, paintings, sculptures and colourful fabrics.

Visit the Hawa Mahal, the five-storey Palace of the Winds. Then continue to the ancient fortress of Amber located on the mountainside. The last part of the way will be done in 4×4. The sights of this fort are the gate of Ganesh painted in pastel colours adorned with a beautiful Ganesh in the dark head and the Sheesh Mahal (the Palace of Mirrors). Return to Jaipur and visit the main attractions such as the publicly accessible part of the municipal palace still inhabited by the Maharaja’s family and the Janta Mantar observatory.

During the morning, return to Delhi (5-7 hours of journey), final stage of this circuit. Delhi has many famous monuments such as Jama Masjid, Red Fort, Qutb Minar and Humayun’s Tomb.